Companies are making a major pivot, and fast

Hi all, Parker here. Happy New Year! I hope everyone had a great break. It was nice to recharge a bit before ramping up content at Crypto Tonight. Stay tuned!

For the first newsletter of the year, what better topic to dive into than the recent rush of Web2 companies pivoting to Web3.

In Partnership with TripActions

What happens when TripActions and Coinbase have a baby? You get more crypto rewards.

Thanks to a new partnership, TripActions Liquid users will be able to get reimbursed directly into their Coinbase account for any personal or manual spend. This means that not only do TripActions users not have to submit an expense report, but that they can get paid back in any of the 100+ cryptocurrencies on Coinbase as well. wagmi.

In recent months, visions of a “Web3” future have departed from niche crypto Twitter and transformed into a mainstream central narrative- guiding not only established media outlets and conferences, but also the company roadmaps of some of the biggest players in tech.  While major companies, VC firms, and central banks scramble to assemble teams dedicated to Web3, some of the most predominant players in tech are going all-in: committing to transform their companies from Web2 to Web3.

Perhaps one of the biggest examples we’ve seen thus far was Facebook’s rebranding to ‘Meta.’ The move, a somewhat embarrassing attempt by Zuckerberg to preserve the company’s future relevance*, garnered much attention. An even more compelling indication of the shifting landscape Web3 is catalyzing, though, are the numerous other tech companies that have made the same pivot in just the past three months (we’ll get into this more below).

But first, What Is Web3?

First, let’s define Web2: the internet today. Web2 is dominated by centralized companies (like Google, Amazon, and Facebook) that provide services in exchange for personal data. By contrast, (and in simple terms) Web3 refers to a decentralized online ecosystem built on the blockchain. The goals of Web3 include decentralization, protection of personal data, and the absence of censorship. Increasingly, many are also using ‘Web3’ as an umbrella term, encompassing crypto and crypto applications.

Another way of contextualizing Web3 is by situating it in the overall evolution** of the web:

Web1 refers to the first stage of the World Wide Web. Earlier, there were only a few people publishing on the web, with a massive amount of users consuming their content. During this time, advertisements on websites were banned. Personal web pages were common, consisting of static pages hosted on ISP-run web services.

The web we know today. Web2 refers to worldwide websites that allow for user-generated content, usability, and interoperability for users. Compared to ‘Web1’, a distinguishing characteristic of Web2 is that it is participatory and social. Users are not only able to publish and consume content but interact and collaborate. Unlike Web1, Web2 has enabled the creation of social media and virtual communities.

Elaborating on the aforementioned characteristics of Web3, the primary distinguisher between webs prior is Web3’s unique value-add of ownership. Packy offers a great definition of Web3 as “...the internet owned by the builders and users, orchestrated with tokens”.

Now that we have a grasp on the trifecta of webs, let’s do some due diligence. What does being a “Web3” company look like in practice?

Well, it could look like a lot of things. Again, Web3 is a beach-size umbrella. But there are a few common features and services companies can integrate to decentralize ownership and control, moving them closer to a Web3 model.

Tokens: Tokens give users property rights: the ability to own a piece of the internet.

Open-source software: Programs and platforms with source code that are readily accessible, and available to be modified or enhanced by anyone.

dApps: Decentralized apps that run on the blockchain. Like the apps on your phone, if they weren’t attached to, and controlled by, your iOS. dApps run on blockchains or P2P networks.

These are just a few common examples, though there are many more!

Let’s look at the timeline here a bit. On December 8th, the popular funding platform Kickstarter announced a partnership with Celo, an open source and carbon negative blockchain platform, to develop a decentralized protocol that Kickstarter will run on moving forward. Kickstarter also established a new, independent organization and governance lab to manage the initiative. On December 9th, Reddit launched a much anticipated waitlist for sitewide expansion of ‘Community Points,’ an Ethereum-based token reward program that will move the social media company further towards a decentralized, Web3 model. Microsoft, Disney, Gamestop, SAP and even Coachella (among others) recently announced Web3 initiatives as well.

The pivot to Web3 has also bled into the fintech industry, especially for payments. In early October, payments giant Stripe announced it’s building out a crypto team to focus on “the future of Web3 payments.” On December 1st, Square changed its name to Block, symbolic of the company’s expansion beyond point-of-sales and shift towards blockchain technologies. Subsequently, Square Crypto, a separate part of the company ‘dedicated to advancing Bitcoin,’ changed its name to Spiral. And most recently, Shopify partnered with GigLabs to launch an NFT platform, allowing US users to launch, sell and purchase NFTs through its website.

Why Are So Many Web2 Companies Making the Pivot to Web3? They’re Getting Dumped:

Will companies be at a disadvantage if they don’t pivot? At Google, retaining employees to crypto companies has become so pressing that it’s landed a spot on CEO Sundar Pichai’s weekly Monday morning agenda. At Apple, engineers received surprise bonuses of nearly $200k in some cases, as an effort to dissuade them leaving for Web3 competitors.

Retaining employees in the face of a crypto renaissance may be strong enough of a concern to convince companies to pivot. That said, there are other possible incentives driving this shift worthy of consideration.

Cryptocurrency is owned by less than 10% of the entire global population, and VCs love to see it: 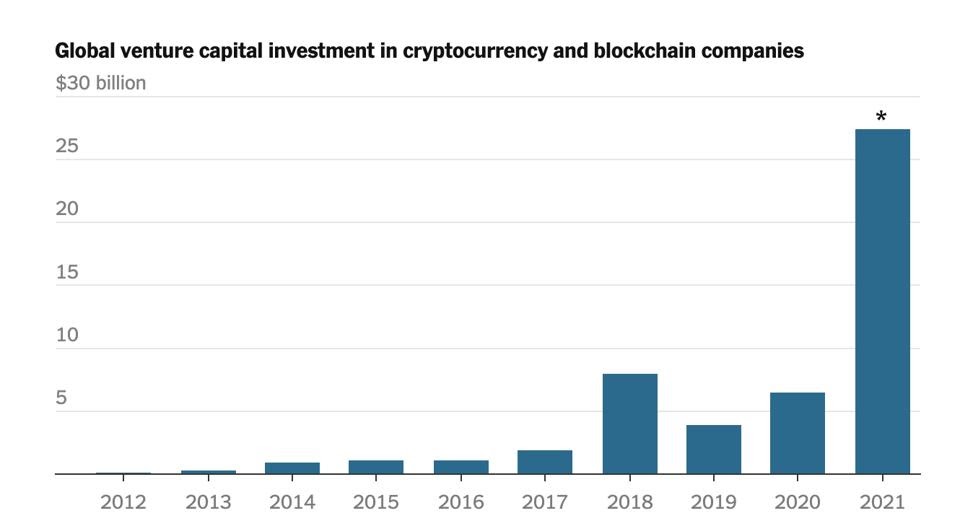 This might be one of the most obvious incentives companies have to pivot- they’re following the money. We’re seeing massive crypto-centric funds being raised- recall the $2.2B crypto fund a16z raised in June, and Paradigm’s $2.5B fund raised just a few months ago, in October. VCs are into Web3 now, and Web2 companies are realizing their need to stay relevant.

This Is For Real:

Maybe companies are changing their strategies and implementing blockchain as an open-source, core technology not only because they’re beginning to recognize recent developments in crypto, but because they’re realizing the urgent and significant implications crypto brings about for the future. We’re still early in what Forbes refers to “the biggest technological innovation since the advent of the internet” - a sentiment shared by experts and degens alike. Web2 companies have a massive opportunity to get in early by pivoting, with potentially one of the most asymmetric upsides in recent history. On leaving Lyft to join NFT marketplace Opensea, former CFO Brian Roberts stated, “I have seen enough cycles and paradigm shifts. When such a major event first appears, I will be conscious.”

The advent of Web3 offers exciting new opportunities to progress towards a more decentralized web that is not only built, operated, and controlled by its users, but owned by its users as well. Zooming out and examining the evolution of the internet, Web3 seems like the next step of its evolution. The ownership economy, which provides users a powerful motivator to contribute to existing content and projects in meaningful ways, has resulted in new, sustainable, and innovative products and tools. Similarly, these models of ownership are expanding to other areas in innovation, including the web, and companies are adopting. Though some Web2 companies making the pivot have received backlash, it seems unlikely this is enough to deter their incentives for change. Considering the nascent nature of the industry, the fact that some of the strongest players in tech are already pivoting their roadmaps to Web3 is a strong signal. What are your thoughts? What did I miss? Ping me here or on Twitter!